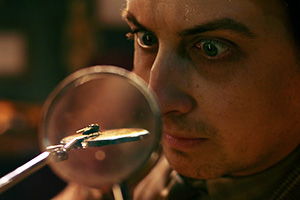 A surreal comedy about a man (Oswald Greene) who arrives at a decaying, soulless clinic in the hopes of curing his crippling anxiety. Befriended by a talking fly, Oswald is encouraged to escape while he still can but before he can act, he is whisked into the back office of Dr. Revelstein, an absurd and flamboyant experimentalist with a knack for rhyming. With the help of his handy assistant, Nurse Pratchet, Dr. Revelstein quickly pinpoints the cause of Oswald's anxiety and offers him a cure. With his fly-friend insisting it's all a ruse and not too late to save himself, Oswald must decide whether to give in to his fears and flee, or make a leap of faith by trusting Nurse Pratchet and Dr. Revelstein.