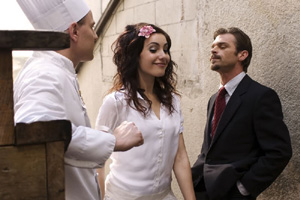 Inspired by the sounds and rhythms of the world around her, Rosie is driven by her "joie de vivre" which resonates in her every move and through her love of dance. After being promoted from dishwasher to waitress at the french bistro where she works, an unfortunate mishap sees that Rosie is demoted back to the dish pit. However, fate has it that she is given another chance. At first, she is overwhelmed by her new job and the demands of her customers, but she eventually delivers to them an incredible performance.