Portfolio > No One Ever Suspects the Chinese Guy 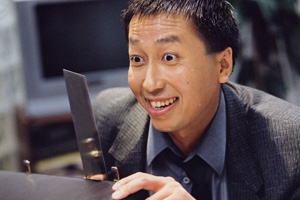 Johnny Chan is an insurance salesman, pitching an insurance plan to the Smith family. After they refuse to buy the policy from him because he is Chinese, he kills them. A few days later, in a similar pitch to the owners of Hal and Hal's Hardware Store, Johnny commits two more grisly murders after they too refuse to buy from him for the same reason. The investigating police are stumped, assuming that a Charles Manson-type, or a Manson Family-type perpetrated the killings, never suspecting it could be someone who is Chinese. Chinese people are too polite to be murderers, right? No One Ever Suspects the Chinese Guy is a dark comedic story about the perceptions, misconceptions and generalizations made about Asian people.